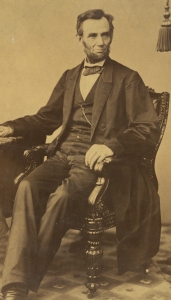 Abraham Lincoln–Nov. 8, 1863-One month after his Thanksgiving Proclamation and a little more than a week before he gave the Gettysburg Address

A silvery, Indian Summer haze drifted over the White House as the leaves on the trees, starved of summer’s extended light, were beginning to turn vibrant shades of red, orange, and yellow.

And the American Civil War was raging.

The smoke of the Battle of Chickamauga had recently only cleared away as other battles and skirmishes were engaged across the nation.

Drafted men in large numbers were arriving in Washington City, determined to fight and die for the Union cause.

An execution by hanging would soon take place. The neck of George Armstrong was scheduled to be stretched the week of October 12, 1863, and his life cut short in payment of his crimes. Armstrong, originally a private in the 72nd Pennsylvania Regiment, had subsequently transferred to Rickett’s Battery. Soon thereafter, the rogue soldier deserted his Regiment and was believed to have formed a band of native guerrillas, who committed many offenses against sutlers’ trains in the vicinity of Fairfax Courthouse. It was suspected that Armstrong was attached to Mosby’s command. When captured, Armstrong had on a Rebel Major’s uniform, and his wardrobe evidenced several other suits of disguise in reserve. It was said that he entered the Union lines several times, and once or twice had the audacity to enter into his old battery.

Major Abraham G. Wileman of the 18th Kentucky Regiment who was wounded in the Battle of Chickamauga had just returned to his home in Pendleton, Kentucky. And on the night of October 5, 1863, he was kidnapped from his home by a gang of guerrillas, stripped of his clothing, tied to a tree less than a half-mile from his home, and brutally shot. Five of his murderers were caught.

On October 10, Confederate Guerrillas were operating only miles from the White House. They were haunting the southern side of the Potomac and efforts to suppress them were ill-directed and profitless. Col. Baker and his mounted rangers had been scouring the country, chasing the Rebel guerrillas. On the night of October 1, 1863, they succeeded in capturing Capt. Augustine of Col. John S. Mosby’s band and about 40 citizens and guerrillas beyond Vienna, Virginia, and were sent in and lodged in the Old Capitol. 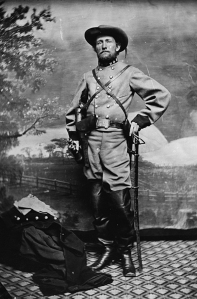 We all are well aware that history repeats. The political and civil climate today is no different from what it was in 1863, except for one stark difference–in 1863, there was a Godly man in the White House. Despite the strife, civil unrest, war, a divided country, bloody battles, tragedy, and chaos, the President of the United States, Abraham Lincoln, believed in seeking the Almighty God for protection and for answers. It was on October 3, 1863, that he penned The National Thanksgiving Day Proclamation. Clearly, President Lincoln’s duty was to his Beneficent Father–God and country.

More than at any time since the American Civil War, our country is divided. Instead of hanging cowardly deserters, we are welcoming them home with open arms, sweeping their treasonous conduct under the rug, and exchanging them for brutal Muslim Terrorists.

We are waging war all over the world with no strategy, no plan, and no end in sight. Our enemies no longer fear us and our allies don’t trust us.

Just as President Lincoln contemplated, we too stand on the precipice of destruction. But our time is so much more dangerous as we have a White House and an Administration full of liars and yellow-bellies. You won’t find a single one to pen for public consumption what Abraham Lincoln did in October 1863.

We need to be reminded by Abraham Lincoln himself, how far we have sunk into the pit of darkness–how far we have separated from the Almighty God. We need to remember that we cannot and will not continue to prosper as a nation if we forget God!

And it is exactly this that our first U.S. President warned us of when he prophetically prayed on April 30, 1789, the following words:

The propitious smile of heaven can never be expected on a nation that disregards the eternal rules of order and right which heaven itself hath ordained. –George Washington

I was thrilled to discover in my rare collection of authentic American Civil War era newspapers, an original printing of President Lincoln’s Thanksgiving Proclamation. When I opened the Saturday, October 10, 1863, issue of The New-York Weekly Tribune, I found the following:

A Proclamation by the President of the United States of America

The year that is drawing toward its close has been filled with the blessings of fruitful fields and healthful skies. To these bounties, which are so constantly enjoyed that we are prone to forget the source from which they come, others have been added, which are of no extraordinary a nature that they cannot fail to penetrate and soften the heart which is habitually insensible to the ever-watchful providence of Almighty God.

In the midst of a Civil War of unequaled magnitude and severity, which has sometimes seemed to invite and provoke the aggressions of foreign States, peace has been preserved with all nations, order has been maintained, the laws have been respected and obeyed, and harmony has prevailed everywhere, except in the field of military conflict, while that theater has been greatly contracted [decreased] by the advancing armies and navies of the Union.

The needful diversions of wealth and strength from the fields of peaceful industry to the national defense have not arrested the plow, the shuttle or the ship. The ax has enlarged borders of our settlements, and the mines, as well of iron and coal as of the precious metals, have yielded even more abundantly than heretofore. Population has steadily increased, notwithstanding the waste [death] that has been made in the camp, the siege and the battlefield, the country rejoicing in the consciousness of augmented strength and vigor is permitted to expect continuance of years with large increase of freedom.

No human counsel hath devised, nor hath any mortal hand worked out these great things. They are the gracious gift of the Most High God, who, while dealing with us in anger for our sins, hath nevertheless remembered mercy.

It has seemed to me fit and proper that they should be solemnly, reverently, and gratefully acknowledged as with one heart, and voice by the whole American people; I do, therefore, invite my fellow-citizens in every part of the United States, and also those who are at sea and those who are sojourning in foreign lands, so set apart and observe the last Thursday of November next as a day of Thanksgiving and Prayer to our beneficent Father who dwelleth in the heavens. And I recommend to them that, while offering up the ascriptions, justly due to him for such singular deliverances and blessings, they do also, with humble penitence, for our national perverseness and disobedience [sins], commend to His tender care all those who have become widows, orphans, mourners, or sufferers, in the lamentable civil strife in which we are unavoidably engaged, and fervently implore the interposition of the Almighty hand to heal the wounds of the nation to restore it, as soon as may be consistent with the Divine purposes, to the full enjoyment of peace, harmony, tranquility, and union.

In testimony whereof I have hereunto set my hand and caused the seal of the United States to be affixed.

Done at the City of Washington this third day of October, in the year of our Lord, one thousand eight hundred and sixty-three, and of the independence of the United States the eighty-eighth. ––ABRAHAM LINCOLN

A scanned image of the actual 1863 newspaper printing:

This year, it is my intention to invite the heartfelt words of President Lincoln to our family’s Thanksgiving Day table, and I urge everyone that reads this to do the same.

I want my family members and friends (who seem so hopelessly caught up in the things of this world) to hear that we truly did have Godly leaders at one time in this country–that prayer and the act of giving thanks to the God of the Universe is not optional–rather, it is vital–it is necessary.

We need to be reminded that we had Presidents in the past who, in humility, actually feared the Living God. They were men of prayer and they gave thanks publicly to the God who provides.

The Washington City of the 21st Century is rife with jackals and weasels.

When mediating on President Lincoln’s words, it saddened me that we, as a nation, have moved so far from the Almighty God. No longer is He in our thoughts and deeds. No longer do we go to Him as a Nation and repent of our sins. No longer is He center of our lives. No longer do we depend on Him for our safety–our protection. God has been replaced with idols–money, drugs, alcohol, technology, electronic gadgets, strange perversions, wanton sex, abortions, pornography, violence, and endless narcissism. We are a nation of people living in unwalled villages–our borders are blurred–and oh how comfortable and blind we are, drenched and soaked in blackness of sin.

We have 86’d God out of our lives and out of our public squares. As a Nation and individually, we are headed for disaster. There is no hope for us, unless we repent and turn to Him. Even President Lincoln, in his proclamation, recognized God’s anger, judgment and long-suffering mercy:

No human counsel hath devised, nor hath any mortal hand worked out these great things. They are the gracious gift of the Most High God, who, while dealing with us in anger for our sins, hath nevertheless remembered mercy.

Yet, how much longer will the Almighty God strive with us? How long will He continue to remember mercy toward us? We certainly don’t deserve His mercy.

How much are we in need of God’s guidance and protection today? I say, we are in dire need, the hour is late, yet so many have turned away from the Almighty God and Apostasy reigns.

I thank God for men like Abraham Lincoln and George Washington, who, if we only take the time to look back, remind us even still today that we were at one time, One Nation Under God.

Happy Thanksgiving: The Expression of Gratitude, especially to God!