Roundtree’s and Dickson’s saloons were crowded with customers, and we will not say how much whiskey was disposed of–it might surprise our temperate friends in Tucson and La Paz. Nobody was hurt, but the boys waxed very merry, and some of them very tipsy, and there was no little promiscuous firing of revolvers… —Prescott Arizona Miner Newspaper, July 6, 1864

I am blessed to reside in Prescott, Arizona, twice the capital of Arizona in Territorial Days. Founded in 1864, the town of Prescott quickly became a popular destination for many and remains so today.

When people think of the Old West, Tombstone, Arizona, famously comes to mind, and rightfully so. The legend of the Earp brothers certainly made it the historical landmark it is today. Founded by a mining prospector who discovered silver in 1877, it quickly turned into a rough and tumble sort of place and proved to be one of the last boom towns on the Western Frontier.

Sadly, there isn’t much left of Tombstone today–save the tourist traps. But even the tourist traps are far from what they used to be decades ago in the 1960s and 1970s. I visited there about seven years ago, only to be disappointed and disheartened at how much it really had changed and not for the better–shops had closed, many were up for sale, and the Bird Cage Theatre, now a museum, no longer had the shows (featuring shootouts and costumed dance hall girls) that I fondly remembered years ago. Contrast Tombstone with the vibrant, lively, bustling, small town of Prescott and you’ll find a town that is every bit as historically rich as Tombstone (arguably more so), Earp brothers and all.

So if you love history (and even if you don’t), a mild climate, and turquoise blue skies, there is no better place to live or retire.

Boasting the World’s Oldest Rodeo (since 1888) and home to the famous lawman, Virgil Earp, Prescott’s history is chock-full of true and exciting stories. Tales of famous gunslingers, gamblers, outlaws, saloons, gunfights, stage robberies, massacres, cowboys, Indians, and pretty much anything the imagination can conjure that is the Wild Wild West, happened in Prescott, Arizona.

(Note: All of the photographs posted below are from my archive collection of negatives by Prescott Pioneer Photographer, Thomas H. Bate, Jr., [Bate Photo Craft Shop] born Oct. 16 1880. Bate married Florence Mae Marks in Prescott on February 25, 1901, and together they had three boys Thomas Henry, Jr., William, and Claude.)

Indelible personalities like Doc Holliday and the Earp brothers were once patrons of The Palace Saloon. In fact, Doc Holliday’s paramour and alleged prostitute and dance hall girl, Big Nose Kate, is buried in the Pioneer’s Home Cemetery in Prescott. 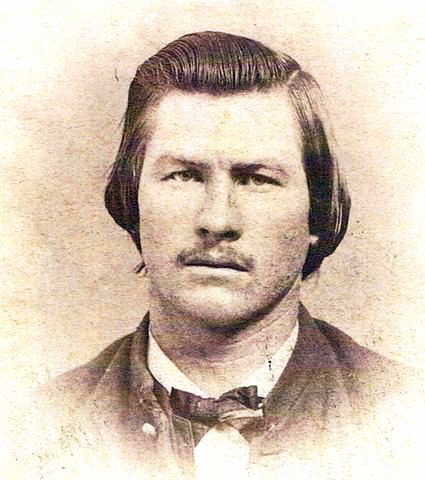 Virgil Earp first arrived in Prescott in 1877. He was accompanied by Doc Holliday and his brothers, Wyatt and Morgan.  After his days in Tombstone, Virgil returned to Prescott. On January 1, 1898, at the age of 55, he established a homestead on 160 acres in Kirkland, Arizona, near Prescott, where he was engaged in the cattle business. Virgil Earp’s Homestead Proof — Testimony of Claimant document is an interesting read. Note the humble size of his adobe home, where he lived with his third wife, Alvira “Allie” Earp.

Virgil also worked a mining claim in the Hassayampa District, where in 1896, he was seriously injured in the collapse of a tunnel. The resulting injuries were:  a dislocated right hip, both feet and ankles badly crushed, a serious cut to his head, and overall a badly bruised body. After having served three years in the Civil War (Co. C. 83rd Ill Inf.) and being nearly murdered in Tombstone and recovering from those injuries, it’s hard to imagine how in the world Virgil survived the mining accident to go on to actively engage in everyday life, much less continue to engage in business concerns and going as far as to run for office on the Republican ticket as Sheriff of Kirkland, Arizona. Needless to state, Virgil Earp was one tough son of a gun. 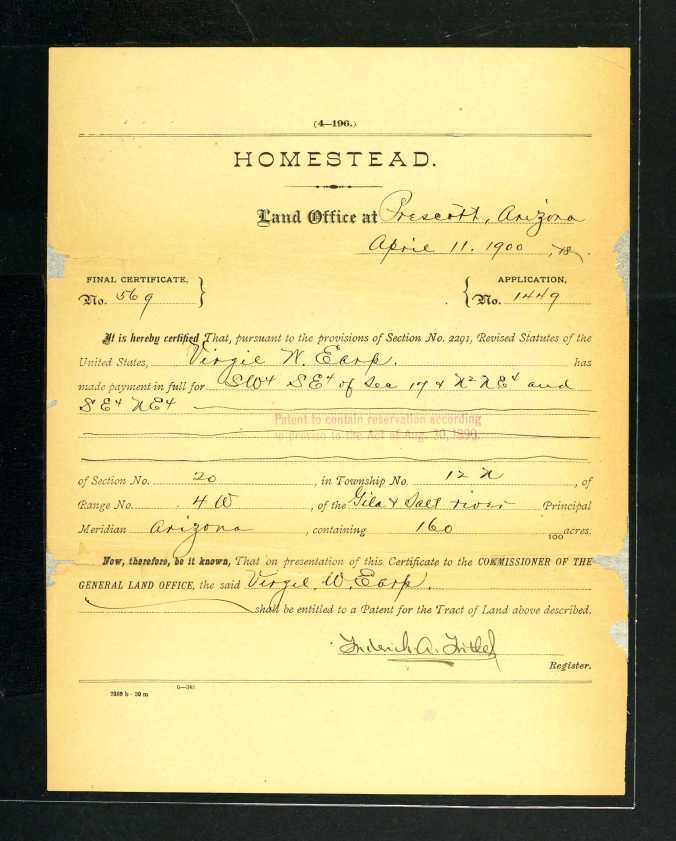 On October 19, 1905, a brief eight years after Virgil Earp established his Homestead in Prescott, Arizona, he would, like his good friend, Doc Holliday, succumb to pneumonia. An article on November 1, 1905, in Arizona Weekly Journal-Miner reports on his death and early days in Prescott (excerpt below).

In company with his two brothers, Wyatt and Morgan, and Doc. Holliday, he came to Prescott about the year 1877. Shortly after his arrival here, and while Ed Bowers was sheriff of Yavapai county, the town was visited by two cowboys from the Bradshaw basin section, who enlivened matters by shooting up saloons and other resorts, finally riding out of the place, shooting right and left as they went in the direction of the Brooks ranch, just outside of the city limits.

Arriving at the Brooks ranch, the cowboys sent word to the officers that they were camped there, and if any of the officers wanted them to come out and get them. These men were considered bad ones, and were known to both as dead shots. Sheriff Bowers organized a posse of citizens, of which Virgil Earp happened to be one, and the posse started for the Brooks ranch on horse back preceded by Deputy United States Marshal Stanford and another deputy in a hack. The party in the hack passed the bad men unmolested, but the cowboys opened fire on the sheriff’s posse, which was on horseback. Sheriff Bowers’ horse was shot in several places, but he returned the fire, and did not get hit.

On arriving at the scene Virgil Earp, who was armed with a Henry rifle, proceeded up the creek in the direction of the shooting, and noticing one of the cowboys crouching behind an oak tree reloading his gun, shot and killed him instantly. The first shot hit him in the heart, and the second shot struck about two inches from the first. The other cowboy was shot with a charge of buckshot and lived for two days, finally dying in the hospital.

A peculiar feature connected with the shooting was that the man struck by the shot fired by Virgil Earp was found lying against the tree with a cigarette in his mouth, which was held there until after the body was removed to town. After this incident Virgil Earp came into prominence as a determined man and good shot.

In 1879 Virgil Earp and Doc Holliday left Prescott for Tombstone, which was the scene of the greatest mining excitement of the time. On arriving at Tombstone, Virgil Earp, his two brothers and Doc. Holliday, were appointed Deputy United States Marshalls, and rendered very effective service against the rustlers and border ruffians that infested that section, cooperating for a time with the city and county peace officers….

About 10 years ago, Virgil Earp returned to this county [Prescott, Yavapai County] and engaged in mining in the Hassyampa District, subsequently moving to Kirkland Valley District. In 1900, he was nominated for Sheriff by the Republican Party, but shortly afterwards withdrew from the race…

A great many harsh things have been said and written about the ‘Earp Gang,’ but nevertheless, it is a fact, that a more charitable man never lived, than Virgil Earp, especially when he had the means to render assistance.

One of my favorite places to hang out is at Prescott’s town square, where all the action of a bustling town takes place and always has since the town’s founding.

The infamous Whiskey Row, just across from the square, draws thousands every year and is especially raucous during Prescott’s Frontier Days Rodeo–providing a glimpse, perhaps, of what it might have been like back in the day that gunslingers and gamblers walked the dusty streets. At one time, there were over 40 saloons that accommodated all manner of clientele. Three fires (in 1877, 1883, and 1900) destroyed the saloons, but the devastating fires didn’t dampen the spirit of the businessmen that forged Prescott. Temporary structures that served as saloons were erected while saloon owners went about the task of rebuilding.

In the foreground of the photograph above, Belcher & Smith erected a temporary saloon using tents on the courthouse plaza until they could rebuild. The Palace Saloon, or what was left of it, can be seen in the background. The Palace was rebuilt on the same site and is located there today. If you look closely, the tent signage in the foreground of the photograph reads Belcher & Smith. Ben M. Belcher and Barney Smith were partners in the Cabinet Saloon, also destroyed in the 1900 fire.

July 6, 1864, Arizona Miner newspaper announced the Inauguration Celebration of Prescott. Oh, how I wish I could have been there! Notice that the celebration opened with a Prayer by the Rev. H. W. Read (the first clergyman to arrive in Prescott) and the playing of the Star Spangled Banner.  (Today, you would be hard-pressed to find a prayer at the commencement of any U.S. celebration, much less the playing of a patriotic song–at least without protests.) Interestingly, the end of the Inauguration article reads:

Throughout the day the Juniper House [the very first hotel and restaurant in Prescott], the ‘Pod’, Roundtree’s and Dickson’s saloons were crowded with customers, and we will not say how much whiskey was disposed of–it might surprise our temperate friends in Tucson and La Paz. Nobody was hurt, but the boys waxed very merry, and some of them very tipsy, and there was no little promiscuous firing of revolvers…” 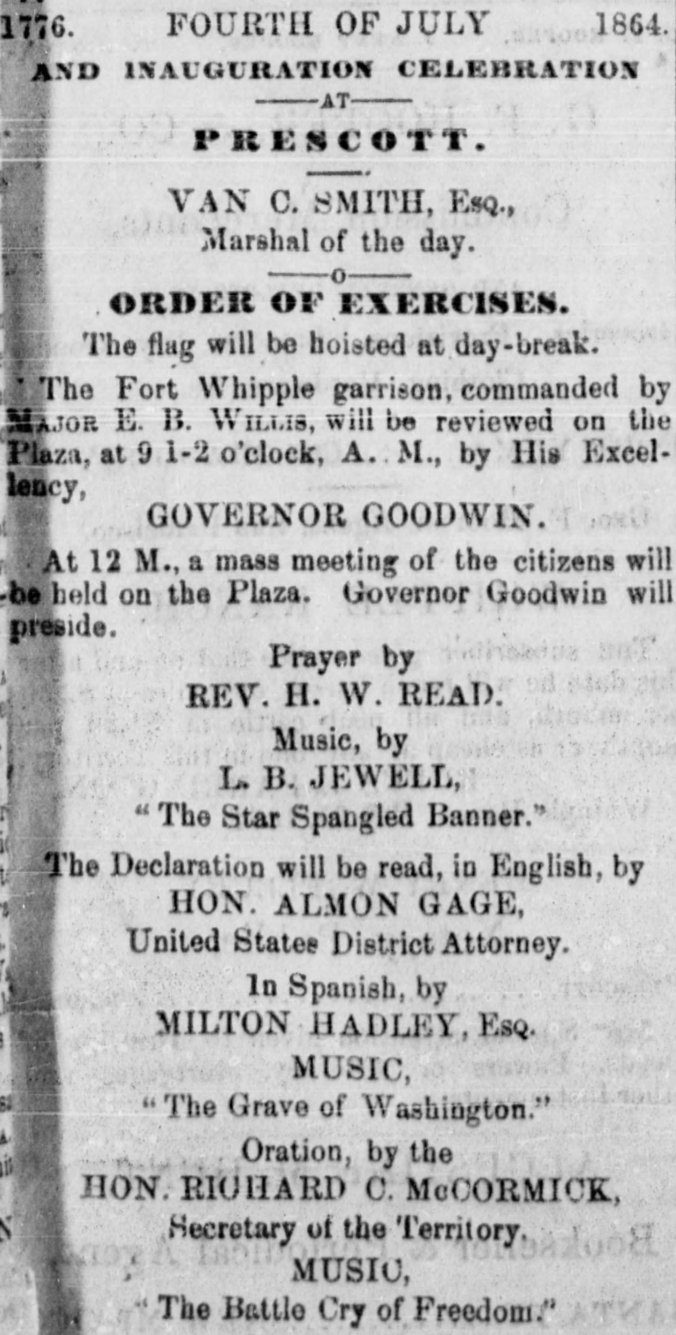 Another of Prescott’s earliest Saloons was run by Lieutenant J. H. Baldwin of the U.S. Cavalry.

An ad for the “Exchange Saloon,” clipped from the Arizona Miner newspaper, April 11, 1866.

John Roundtree and Dr. Alsap opened the first saloon in Prescott. It was opened under some large pine trees that grew on the lower end of Goose Flat. It was built of cloth and timber; a small wagon sheet stretched over a pole which rested in the forks of two upright posts. The bar fixtures consisted of one ten-gallon keg of whiskey; a half-dozen tin cups and a canteen of water. The cups had handles, loose at one end, and the loose end formed a hook by which they hung around the chain of the keg when they were not in use. Early Settlers in Prescott, History of Arizona, by Thomas Edwin Farish, 1915.

The first well-regulated saloon was opened by Tom Hodges on Cortez Street who sold drinks and cigars and took ‘Burros’ in payment. Early Settlers in Prescott, History of Arizona, by Thomas Edwin Farish, 1915.

A notice published on October 26, 1864, in the Arizona Miner indicates that John Dickson and Thomas Hodges were partners in The Pine Grove Saloon.

Prescott’s town square is a remarkable and nostalgic public space that is a joy and wonder for all who visit there. I often sit on a bench under the cool canopy of the giant trees that have witnessed untold events of long ago, with the old Courthouse as a backdrop. Sometimes, as I sit quietly, eyes closed, I can almost hear the echoes of the past–the clip-clop of the horses’ hooves, the creaking of the horse-drawn wagons, the tinkling of men’s spurs, and the whoops and hollers of gamblers and miners in the local saloons.

Yes, Prescott is truly a magical place. Sure, times have changed. But to me, the town of Prescott is still very much the same as it was in its early days. Its ghostly past is a constant and welcome visitor here.