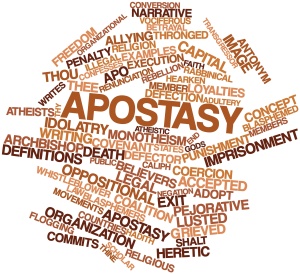 The days are growing darker.

You don’t have to believe me, but it doesn’t make it any less true.

Sure, just stick that head of yours in the sand and pretend it isn’t so and see how that works out for you.

We are in the final seconds of the two-minute warning.

Satan is rocking many to sleep with his lullaby of deception and Christians are at the top of his hit list and he is succeeding.

I watch as the ungodly (the atheists, agnostics, apostates, and unbelievers) strain to convince themselves and others that there is no God.

They are all without excuse and the wrath they will soon face will overtake them, unless they repent and turn to the only one who can save, Jesus Christ.

Apostasy is the hallmark of the end of the age that Jesus talked about.

One only has to look to the Internet to find Satan’s latest work in his effort to kill, steal and destroy.

I was sick to my stomach when I saw a perverted twist on the Ice Bucket Challenge, called The Blasphemy Challenge. It’s almost too horrific to believe, yet there it is–straight from Satan and his demonic forces.

The people who are joining and participating in this are mostly the young and they have no idea what they are doing. But it’s no excuse. There are also a number of mature adults who have decided to go down this path. But still, there’s no excuse. We as Christians need to pray for them–all of them. For without a profound change, they are condemned.

They are the walking dead.

I wonder if any of these people actually contemplated the gravity or weight of what they are publicly and defiantly proclaiming. Because, you see, it is a proclamation and a statement of allegiance to  none other than the Prince of Darkness. What they have done is a very somber and dangerous act.

Not a single one of them knows how much time they have left on this earth. The Bible says: And as it is appointed for men to die once, but after this the judgment.—Romans 9:27.

How many of them know that at the time of death–the very minute the last breath is taken–every man’s final state is determined? These words can have no other imaginable meaning but this, that at His first coming Jesus sustained the person of a sinner, and suffered instead of us, but His second coming will be altogether different–He shall appear, not as a Sacrifice, but as a Judge. So, I say, how can these people neglect so great a salvation that Jesus suffered and died to freely give us? I would not want trade places with them. I thank God that I belong to Him and that Satan has no power over me.

For it is a fearful thing to fall into the hands of the living God. —Hebrews 10:31

What follows is just one tragic, sad, and pathetic example of the many individuals that are posting these demonically influenced videos (she looks like such a sweet girl):

As no wisdom, learning, virtue, wealth, or power, can keep one of the human race from death, so nothing can deliver a sinner from being condemned at the day of judgment, except the atoning sacrifice of Christ; nor will one be saved from eternal punishment who despises or neglects this great salvation.

There is also another dangerous and hellish game being played called, “Unbaptism”. Read about it on Prophecy News, 100,000 Atheists Become ‘Unbaptized’.

My heart breaks for the many who are falling into Satan’s snare. The people who participate in these deceptions will certainly have their stated wish granted. They will be gathered and bound for eternity in Gehenna with their master, Satan and his demonic angels. However, as long as God’s grace abounds, and these individuals still live, there is still time to change course.

A prime example of an atheist changing course, is the story of Holly Ordway, Ph.D.:

My prayer is for every single atheist, agnostic, unbeliever, apostate, and Christian, to watch and listen to Holly Ordway’s testimony. It is only the power of a Living God that can change lives–the old is passed away and behold all things are made new –2 Cor. 5:17.
Thank you, Holly, for sharing your story.