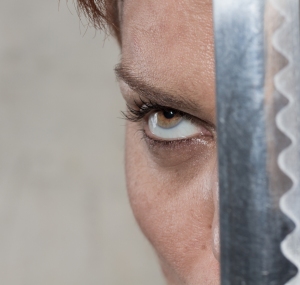 I am reading the Book of Judges.

I just can’t put it down.

The more I read of the biblical personalities described, the more I want to know them.

I am particularly fascinated with the story of the fearless, wise, and courageous Deborah (2654-2694 BC).

What a woman she was–the fourth Judge of the Israelites–and how mightily she was used by God.

I marvel at the period of time in which she lived and the breathtaking things she accomplished, which brings to mind: How much more, with all the blessings of modern civilization, should we stand up for God and say:

Deborah was a married woman and so she was not without her duties to a husband. She had other responsibilities as well. She was a prophetess and as such she was instructed by God in divine knowledge. This necessarily means that she had to be open and sensitive to the guidance of the Spirit of God. I see her as a woman who could not live without seeking God’s counsel and guidance daily, perhaps hourly–He was the air she breathed. After all, she was the very mouth of God to the Israelites that came to her for guidance and advice. Through Deborah, God corrected abuses and remedied grievances.

Deborah was also a warrior! By God’s direction she directed Barak (a military commander, the son of Abinoam from Kedesh in Naphtali) to raise an army and go up against the Canaanites (an Egyptian Vassal state), Israel’s oppressor and specifically, General Sisera, who brutally oppressed the Israelites on behalf of King Jabin.

But Barak refused to go against Sisera without Deborah at his side.

Deborah had a champion’s heart! More so than any of the men of her day. And being the woman she was (knowing that God was with her, as well as with Barak and his army) she assured Barak that she would not send him into battle if she were not willing to go herself. And so she vowed her presence.

Those who are quick to call others to duty in God’s name, should absolutely be ready to go to battle themselves.

Sisera possessed 900 iron chariots and was equipped with archers and all manner of accoutrements for a successful war against his enemies–the Israelites. Certainly, Sisera seemingly had the distinct advantage. He was ever so confident in his chariots of iron. Isn’t that the way of mere men? In Sisera’s mind it would be an easy win. No doubt he celebrated in advance, before even one of his iron chariots ever turned a wheel.

And so the day came for battle and Deborah said to Barak:

UP! for this is the day in which the Lord hath delivered Sisera into thine hand; is not the Lord gone out before thee? –Judges 4: 14

And so Barak went down from the mountain and 10,000 men with him. The battle ensued.

But much to Deborah’s credit and the ruin of Sisera, God showed up on the battlefield:

And the Lord discomfited [frustrate the plans of; disorient, distress] Sisera, and all his chariots, and all his host, with the edge of the sword before Barak; so that Sisera lighted down off his chariot, and fled away on his feet. –Judges 4:15

Don’t you just love it?

Can you just picture the confusion and the chaos Sisera met with?

You just want to scream: Right on, God! Way to Go!

Not a man of Sisera’s army survived.

And just like the spineless coward he was, Sisera fled on foot, only to have an iron tent stake driven through his temple by Jael, who Sisera thought a friend. Interestingly, according to the Jewish Midrash, Jael engaged in sexual intercourse with Sisera seven times, but because she was attempting to exhaust him in order to kill him, her sin was for Heaven’s sake and therefore praiseworthy. Isn’t it ironic that Sisera trusted in his iron chariots yet it was an iron tent stake that was his ultimate demise.

God’s justice is ever so perfect and sometimes meted out with a huge portion of irony.

Oh how disappointed and crushed are those that rely on the flesh (pride and confidence) to get them through–trusting in the creature rather than creator, the Living God!

If you haven’t read Deborah’s story (Judges Chapters 4 and 5), I encourage you to do so. I promise, you will NOT be disappointed. It is instructive for us today.

Matthew Henry (1662-1714, a great Bible commentator of his day) says it all regarding Sisera’s end:

It is probable that Jael really intended kindness to Sisera; but by a Divine impulse she was afterwards led to consider him as the determined enemy of the Lord and of his people, and to destroy him. All our connections with God’s enemies must be broken off, if we would have the Lord for our God, and his people for our people. He that had thought to have destroyed Israel with his many iron chariots, is himself destroyed with one iron nail. Thus the weak things of the world confound the mighty. The Israelites would have prevented much mischief, if they had sooner destroyed the Canaanites, as God commanded and enabled them: but better be wise late, and buy wisdom by experience, than never be wise.

The question is, which are you?

2 thoughts on “Delivered Into the Hands of a Woman…Deborah the Great!”