We left for the hunt on Friday morning.

The clock read 3:48 a.m. as I said goodbye to my dogs and followed my husband out of the house.

(I hadn’t slept much. I wasn’t at all ready for the wicked 2:30 a.m. wake-up call from my husband’s ancient and much-hated-by-me alarm clock. Bright-eyed-and busy-tailed, I was not.)

We hopped into our trusty, 1983 Jimmy, permanently marked with plenty of Desert pinstriping, and headed out.

One stop for coffee and a supply of ice on the way and in an hour and a half we would arrive at our destination which was to be smack-dab in the middle of a cluster of Arizona, Gold Mining ghost towns known as Weaver, Octave, and Stanton–just on the outskirts of the sleepy town of Congress, near Yarnell (where 19 Prescott, Arizona, firefighters tragically lost their lives on June 30, 2013).

Arizona Territorial history is one of my passions, so when I learned from my husband exactly where we were going, I was thrilled and I hoped for something I could photograph. I brought along my camera just in case I found something worthy to capture for posterity. It’s not often that I get the opportunity to explore an Arizona ghost town–so to be hunting in the middle of all this fantastic, old west, rich gold mining history–well, I was in heaven.

As we got closer to our destination, the caffeine kicked in and I started to get excited. This was all new to me, so I readied myself for the adventure, the experience, the unexpected. My job, after all, was to scout…to glass the soaring mountain ranges and zero-in on that Buck my husband had come to claim as his.

This hunt, which you might recall I was not so excited about going on–the one I had to muster enthusiasm for–the one I thought would bore me to tears, turned out to be one of the most inspirational, impressive, and dramatic two days of my life.

When we arrived at the general hunt location at the top of Yarnell Hill, it was still pitch–the sun had not yet started to rise. We turned off the main road and lumbered and galumphed our way along a rough, primitive road where Mesquite trees, cactus, and all sorts of desert brush added to the already heavily pinstriped body of the Jimmy. For what seemed like forever, we continued to crawl, twist, and wind our way through the desert mountains.

Birds that were roosting in the brush overnight were rudely kicked up and disturbed as we barreled on through (poor things–I thought about that accursed alarm clock as they darted off)–our lights bouncing from sky to desert mountain floor as we jerked and gyrated over the terrain, headed straight up a mountain for my husband’s “first favorite hunt spot,” as he called it.

I thought it would be freezing cold, but much to my delight, it wasn’t. We were in the high desert and the weather was unseasonably warm for the end of October, so it promised to be a gorgeous early morning. I had borrowed a light-weight, long-sleeve Camo shirt from my husband–I wanted to look the part, you know–and that was all that was needed–no need for a coat–no long johns–no gloves. Feeling confident that things were off to a great start with the weather, I was suddenly and politely warned by my husband when he said: It may be nice now, but expect it to be hot come mid-morning. And it was–miserably so. Not quite what I expected–but nothing on this trip would be as expected.

We finally came to a stop at the top of a mountain. My husband shut off the truck and I said, Is this it? He put his finger to his lips and said, Shhhh…and whispered, we have to be quiet now.

It was time. I would now be tested. The challenge was on. 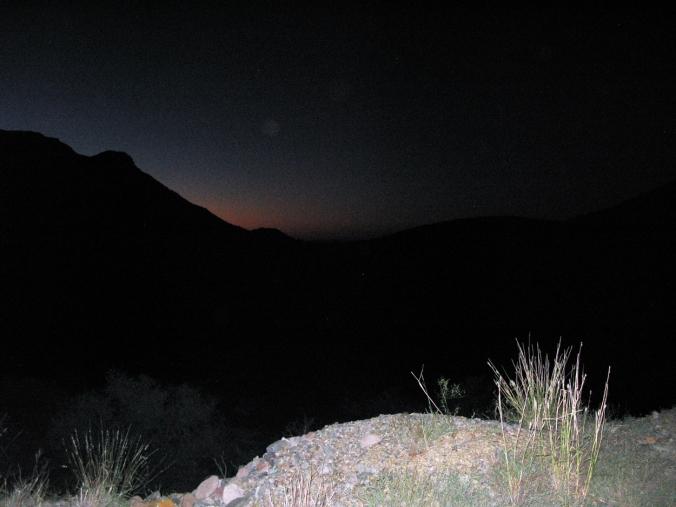 I followed my husband’s lead as we got out of the truck–leaving the doors slightly ajar. I glanced up and the stars–millions and millions of them were brightly stretched across the night sky–a sight not often seen in the city and I marveled at God’s handiwork.

Like a familiar dance, my husband began to quietly buzz around the Jimmy, setting up all his necessary accoutrements. He placed his cased rifle on the hood of the Jimmy and harnessed his field glasses to his chest, a range finder and all manner of gadgets kept coming–all expertly organized and at the ready. He shoved a pair of binoculars at me and whispered: Here, these are yours. I proudly put them around my neck, and waited for further instructions.

A faint glow of light on the eastern horizon signaled the sun was coming up. Little by little, more and more light was shed. The beauty of the early morning light on the mountain range was stunning. Again I marveled at God’s workmanship and I felt blessed to be standing right where I was at that appointed time, admiring what I would have missed if I had stayed at home. Little did I know, this was only the beginning of what God had in store for me this day and the next.

Any Movement…A Flick of an Ear or a Tail

Then my husband whispered:

You see this mountain range?

Yes, I said. How could I miss it? Always the smart-Alec, I am. 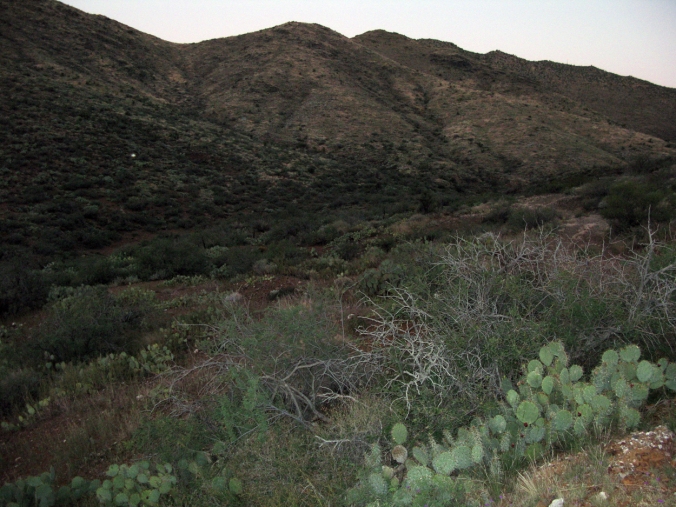 He said, The deer are just now getting up, stretching and yawning and getting ready to travel. You may see them come across this mountain range, so look for movement here–any movement–a flick of an ear or a tail (and he pointed to the area I was to scan).

Not quite the case.

As the sun continued to rise and the terrain became more and more visible, I thought: goodness sakes alive, how in the world could anyone spot anything so far away, much less a flick of an ear or a tail.

I studied my husband as he looked through his field glasses. I was amazed at how committed he was to the task. It was if they were glued to his face–like a statue, he was so splendidly intent–so solidly focused.

After about 20 minutes, okay more like 10 minutes, I was starting to go cross-eyed looking through those glasses and my so-called focus began to wander to well, other things…like the mine shaft behind me. Wow! Now that was cool. My attention was immediately directed to my camera, which was unfortunately still in the Jimmy. I wanted to retrieve it. The sun was almost up enough to where I could start photographing. BUT… 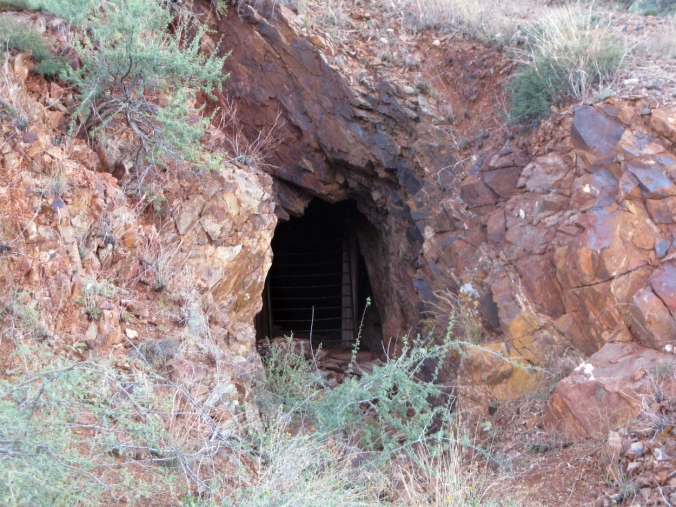 I had a job to do. I was supposed to be glassing the mountain range for deer–but I started to discover more and more things that were begging to be photographed. At this point, like it or not, I was completely and utterly distracted.

It had started already–being me, I mean.

I couldn’t stand it any longer (the morning light was perfect), so I crunched my way (too loudly) over the rocks to the passenger door of the Jimmy. I carefully pulled open the door which was already ajar and the interior cab lights popped on. My husband shot a look at me like–what are you doing?

I whispered: Camera! and held it up to show him and immediately and as quietly as possible, I plodded (crunch, crunch) back to my post to glass the hillside for that flick of an ear or a tail.

But it wasn’t long before, yes…the field glasses were replaced by the camera hanging around my neck. I sneaked away (unnoticed) over to the mine shaft and I started snapping.

The mine shaft was intriguing…dangerously so. I wanted to know how far it went and where it ended up, or did I? I have to admit, it was a little creepy as I looked into the dark tunnel–snaking its way along into utter darkness. I suddenly found myself looking for an opening in the mine shaft gate. I began to consider whether I could or should squeeze past and slip on into the mine…just a little.

What harm could there be in that?

Stay tuned for the next installment… 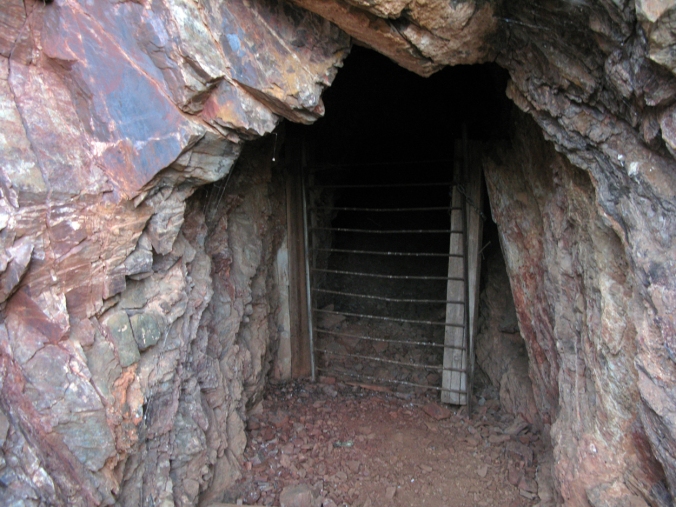